The Phantom Of The Cinema

The Phantom Of The Cinema

The Phantom Of The Cinema is an animated short film in which we, the theater audience, get an indiscreet look behind the screen of the cinema. The film suddenly jams and breaks, allowing us to see what happens behind the projection screen when everything is going horribly wrong.

Winner of the Grand Prize and Trophy at Anim’est international film festival Romania (2009). Dutch entry for the Oscars of 2009.

This movie is all about celluloid film - a celebration of 35mm, if you will - and it premiered in the very year the world made the historical change from analogue to digital film. It was Erik's last actual film, on a reel, developed in a lab. Today he renders his DCP's on his computer and sends them to theaters via the internet. That aint no science fiction, that's modern film making.

When the film “The Phantom of the Cinema” jams and runs out of the projector, the theater becomes dark. Suddenly a lamp behind the silver screen is switched on. It appears there are three rooms behind the screen: the chefs office, the lavatory with the cleaning lady, and the editing room with the janitor.
We witness them trying to keep the show on track, all as a shadow play on the back of the screen. Ignorant of the fact that we can see their every move the chef shouts at his janitor and continues work on his sick odd job: shooting ‘dirty pictures’ with the cleaning lady. In a chain of disastrous slapstick events the janitor saves the cleaning lady from this horrible tiran. But will we finally get to see the movie we came to see..?

To get a copy of the DVD please contact il Luster productions. It contains an introduction by the director and if you want to learn all about the complexities and secrets of the Phantom story you can listen to the directors commentary. If you only want to enjoy the music, you can choose to do just that! 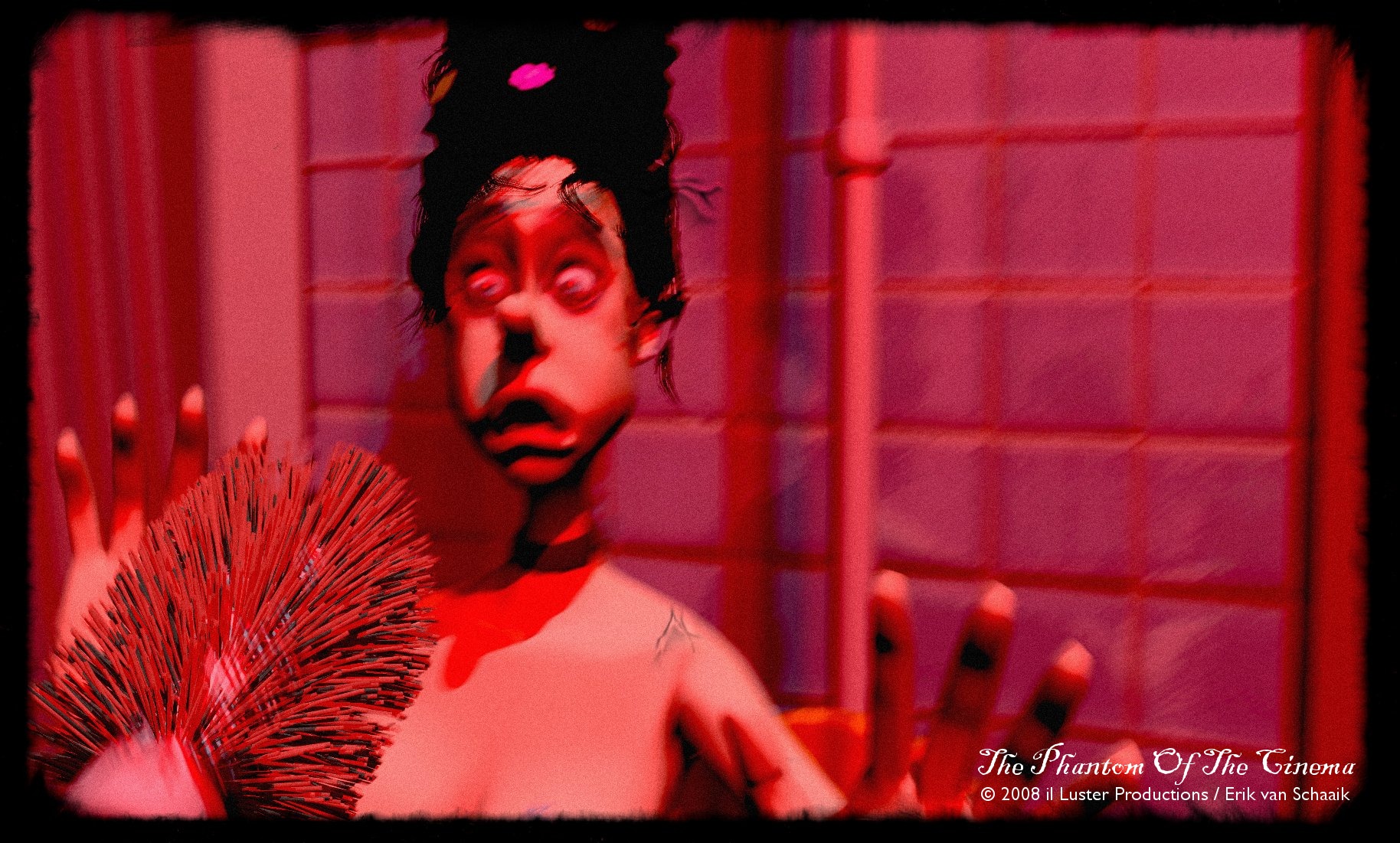 Here's some footage of the restoration of the historical Luxor Theater in Arnhem, as featured in The Phantom In The Cinema. The movie premiered in this wonderful Jugendstill cinema by architect Willem Diehl on the day it re-opend for the public.

Here's our digital version of the Luxor building. The model was made by Luuk Steitner, creator of Zign Track.

Have a look at the sound recordings for The Phantom Of The Cinema. The destruction of analogue tape!

Here's a making of, filmed on one of Erik's first mobile phones. Explaining the process of creating a digital character. It was Erik's first CGI animation sequence, so he was learning on the job. A rather steep learning curve, as he remembers.

Here's a raw render of Erik's first CGI animation. A look behind the cinema screen, literally and figuratively. This is the moment where we get to see the characters up close: the boss, shooting dirty movies with the toilet lady, and the operator messing up the shot. To see the finished sequence, watch the movie.

You never really get to see the Phantom. So what does he look like? Well, here's a quick render of the creep:

Composer Martin Fondse at work at the Orgelpark in Amsterdam, composing the score.

The Phantom, a movie about a film show gone wrong, was screened in many different theaters, on different festivals in different countries. Erik visited several of these screenings. All of them had a problem of some sort. "I have never seen so many failed attempts to project a movie. There were problems with the sound, they forgot to dim the lights, they cut off the epilogue scene, the film was projected much to big so all action happened off screen, it was projected with the wrong aspect ratio, the operator even knocked over the projector one time. I am not lying! The Phantom Of The Cinema is jinxed. Beware!"